E-scooters trial results in problems for people with a disability

Tripping over scooters, trying to pick up fallen scooters, and scooter blocking footpaths. Unfortunately, these are ongoing issues for people with disability who are navigating streets in Hobart and Launceston, and they came to light during a forum organised by Hobart City Council to discuss the 12-month trial. What also came up was a desire and willingness by organisations representing people with disabilities, and Council to work together to solve these issues and see the e-scooter trial be successful.

Hobart City Council’s Robert Stevenson, Manager Smart and Sustainable City, explained to those at the Forum at Town Hall (and those online) that the e-scooter trial was about seeking transport opportunities that reduce vehicle emissions. He said that with 50-60-% of trips taken around Hobart are less than 2kms, the Council’s keen to find ways for people to get around the City that are a sustainable choice.

-There have now been about 270,000 rides taken, with no evidence of serious injuries

-7 incidents have resulted in a visit to the Royal Hobart Hospital, 2 involving an overnight stay

Hobart City Council’s website says, ‘Under the terms of the trial, the operators are responsible for all aspects of managing use of their products in the City of Hobart area. The city will monitor their operations as part of the trial agreement.”

The Council says it discussed the scooter trial with a number of organisations representing people with disability before it went ahead. ParaQuad Tasmania was not consulted.

The scooter companies, Beam (purple) and Neruon (orange scooters) had a chance for presentations at the Forum too. Operators listed safety features including regulated speed, indicators, a warning beep for approaching pedestrians and a bell.

Beam’s Hobart Operations Manager, Glenn Alldis said riders were instructed not to obstruct footpaths and to park in specific places. He explained they have access to a map which shows where scooter can be ridden but no parked and riders can be automatically suspended after three breaches of rules.

Mr Alldis said they have a couple of new scooters in development – one with a seat fitted and another with one wheel at the front and two at the back.

The company also said bad parking could be reported, with its Safety Ambassadors responding, on average, in less than one hour.

Orange scooter operator Neuron’s Regional Manager Nick Chang told the Forum that each of its scooters is attended by one of its staff close to two times every day. And that its Safety Ambassadors are employed specifically to look out for riders displaying bad behaviors. The company representative said the scooters have voice technology which reiterates road rules to riders, and can be detected when a scooter falls over, so it can be found and righted.

A number of people with disability made comments as the event went on. Their concerns included a perceived lack of consultation before the trial started; not being able to identify problem scooters due to vision impairment; and navigating wheelchairs and other mobility devices around scooters parked badly, often on already packed pavements.

The final speaker at the event was Jen Nichols, who has a vision impairment. Ms Nichols firstly told the group that she’s keen to see e-scooters become part of our society. But, she explained, she had been confronted with a number of issues that would need to be resolved, to make the trial successful.

She gave an example in which she was walking down a city street with her assistance dog when they were confronted by a speeding skateboarder. After crossing a busy intersection, the next thing she knew she was on the ground with her dog on top of her amid a “tangle of 8 e-scooters which had parked across the only safe pedestrian access.”

Ms Nichols identified other issues with e-scooters which cause her problems, including their speed, a lack of noise as they approach, and difficulty reporting problem vehicles because of vision impairment. 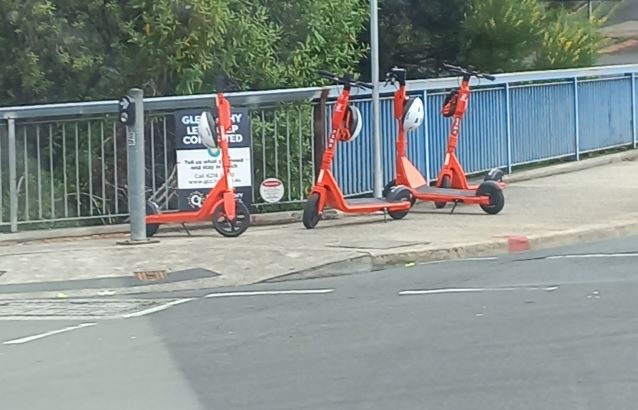 (An example of scooters parked across a footpath).

E-scooters have a speed limit of 15km/hr on footpaths and 25 km/hr on roads. (Scooter riders must use footpaths where there are central lines on roads).

Users of wheelchairs and other mobility devices must travel at 10km/hr on footpaths.

Ms Nichols suggested the benefit of bringing all stakeholders together – Disability Voices Tasmania, Council on the Ageing, Blind Citizens Australia, ParaQuad Tasmania, Beam, Neuron, Tasmania Police and Local and State Government representatives) – to monitor the e-scooter trial and come up with solutions to any problems that fit for all the groups.

A coalition of concerned parties including ParaQuad Tasmania have voiced their concerns to Tasmania’s Department of State Growth and are awaiting a meeting with them.

Hobart City Council said it has started to contact local organisations that advocate for people with disability, to help it deal with concerns about the e-scooter trial.

And this is Neuron’s website Neuron Mobility: Safety-leading e-scooter and e-bike operator (rideneuron.com)