ParaQuad Tasmania congratulates Sorell Council for its consultative approach to delivering beach access ramps at two popular locations in its municipality. It’s become what’s believed to be the first Council in Tasmania to deliver permanent access ramps that lead to the water’s edge – a game changer for people who use wheelchairs and other mobility devices.

Park Beach and Carlton Beach now have ramps in place that make it possible for wheelchair users and people who use other mobility devices to access the sand and water.
Before installing the ramps, Sorell Council contacted ParaQuad Tasmania to get advice on how best to improve accessibility.

“We talked to them about options, including beach matting, or a more permanent solution. We recommended any ramp should ideally take users to the hard sand at least,” said Richard Witbreuk, ParaQuad’s Accessible Tourism Officer.

Engineers from Sorell Council then designed and produced the new ramps, first at Carlton, and most recently at Park Beach, which allow direct access from the carpark right down to the water – going above and beyond what was recommended.

“When council was developing the route for the Dodges Ferry Carlton Loop it was apparent that we needed to incorporate the beaches. To ensure it was accessible for as many people in the community as possible we consulted with ParaQuad Tasmania. They made fantastic suggestions about what could be done and how we could make it work for people with differing levels of mobility,” said Mayor Kerry Vincent.

“Once the route and beach accesses was established we also worked to ensure the onsite accessible parking was compliant and toilet signage implemented. These elements have really enhanced the beach accesses and made them much more widely accessible. I’m proud of this work and we will continue to work with ParaQuad to ensure other elements of our recreation facilities are accessible too.” Mayor Vincent added.

Kevin Faulkner, ParaQuad Tasmania’s Disability Sports Coordinator, is a local of the area and a wheelchair user who often heads to the beach. He has tested and is impressed with the new facilities.

“What’s good about this is that I can access the beach independently. I can get onto Carlton Beach and push all the way to Park Beach, and do it on my own if that’s what I want to do,” Mr Faulkner said.

“After years of advocating for accessible beaches, to see what Sorell Council has delivered is fantastic. We believe it’s a first for Tasmania and it shows leadership and commitment to accessibility,” Mr Witbreuk added.

“It’s a smart move by the Council because it makes the area a destination for more people to come and enjoy. It shows other Councils what can be done with a consultative approach.”
A survey conducted by ParaQuad Tasmania in 2021, responded to by 40 people aged 18-80 (70% of whom were manual or electric wheelchair users) found the biggest barriers to accessing a beach were lack of suitable ramps (82% agreed) and difficulty getting to the sand (80/%).

Other factors were lack of suitable change and toilet facilities (56%) and lack of accessible parking (51%). It also found that if beaches were more accessible then respondents would enjoy activities like sitting on the beach (72%), spending time with family and friends (64%) and swimming (59%).

A couple of Tasmanian Councils and several Surf Lifesaving Clubs facilitate the use of beach wheelchairs (chairs with big wheels suitable for crossing sand), which are beneficial for people who would like to access beaches with the help of others. The information can be found here.

Councils are encouraged to contact ParaQuad Tasmania to get advice on what constitutes good access to beaches in their municipality. 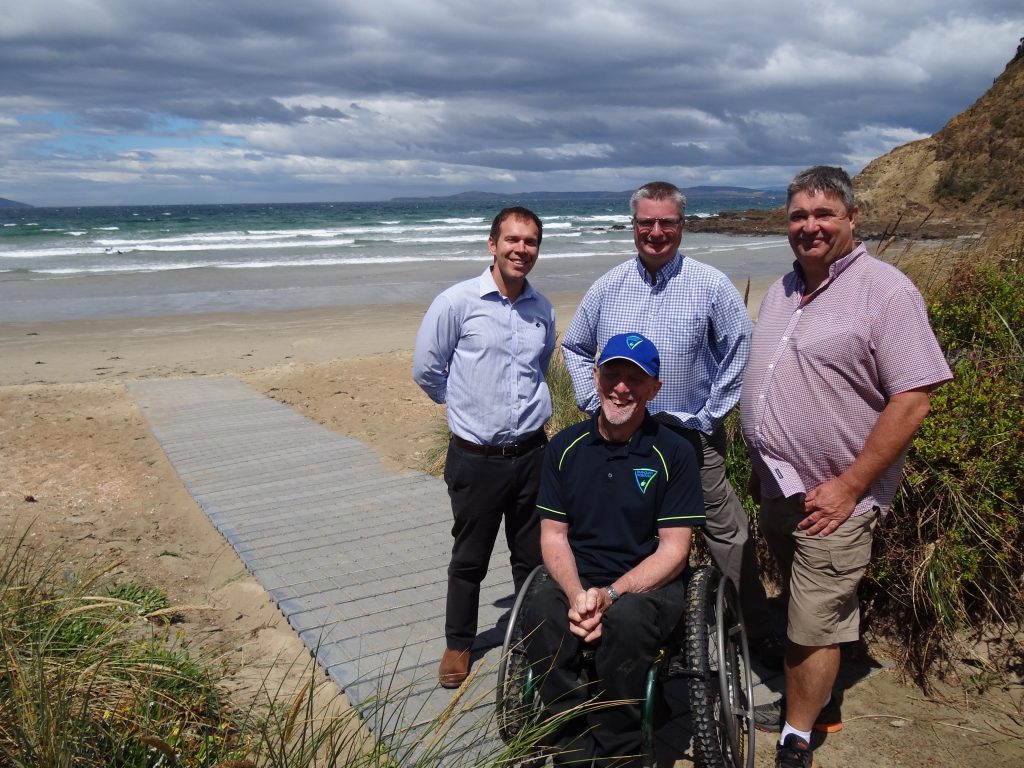